Flam & Luce is a Portuguese lighting brand. The original form that overturns the concept of conventional lighting design and the item in which different materials such as wood, iron, and stone are exquisitely mixed have received high praise in the World market. Everything is done in-house consistently from design to manufacturing, and has a reputation for high quality.

Flam & Luce ® Luminaires appeared in the early 2000s in the French market as a trader in the indoor lighting area. A few years later and following numerous requests from several clients, it initiated its own creation process of exclusive design lamps in collaboration with different designers.

At the end of 2011, the brand was 100% fully acquired by ByClassy – Decoração e Interiores, LDA. This company centres all its production structure and logistics in the centre of Portugal. A new restructuring cycle began; the designers team was expanded and the role of the design editor was reinforced with own exclusive lines.

With two collections per year, launched during the Maison & Objet in January and September, Flam & Luce provides to it's clients a wide range of products meeting different styles and combining several materials with high-quality production standards.

Flam & Luce works in the B2B market, supplying much different business such as furniture stores, lighting stores, contract market and also architects and interior designers. The company provides either an exclusive development or a customisation of the existing project, always with certification guarantee for use in accordance with the European and international standards.

Flam & Luce can customize all their models or produce your craziest projects! Do not hesitate in contacting us. 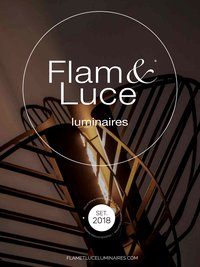